Exodus, Exile and Resurrection: Living Beyond Tribalism and Individualism

In Church and World, Ethics, Theology

[This post originally appeared on the Missio Alliance Blog.]

END_OF_DOCUMENT_TOKEN_TO_BE_REPLACED

I get asked about my dissertation a lot, and I’ve posted about it before (abstract here, and theological significance here).  I’ve definitely made some headway in the past six months, but things have been slow as I’ve been adjusting to a new full-time job and have taken on a few other small writing projects.  Those are done now though, so 2015 promises to be a very productive writing year…  Anyway, to get back into it, I rewrote a description of my topic for a fellowship application, and here it is.

Seen within the context of the phenomenon of globalization, I am examining the Christian understanding of salvation with respect to the violence and impunity that has occurred as a result of the U.S.-Mexico Drug War. To do so, I ask: what is the good news and hope that the Christian faith promises to those who suffer in this conflict, and what kind of engagement and response does such a promise demand from North American churches in light of the difficulty that our Mexican neighbors are facing?

END_OF_DOCUMENT_TOKEN_TO_BE_REPLACED

Conference at UNAM in Mexico City: Philosophical and Political Dimensions of NAFTA

Borrowing significantly from my dissertation and drawing on the work of Enrique Dussel and Mark Lewis Taylor, the title of my talk is “Globalization, NAFTA and the U.S.-Mexico Drug War: Twenty Years of Free Trade as Decolonial Struggle.”  I am especially looking forward to hearing from Dussel himself, as he will be giving the keynote address.  I will share details from my presentation afterwards. 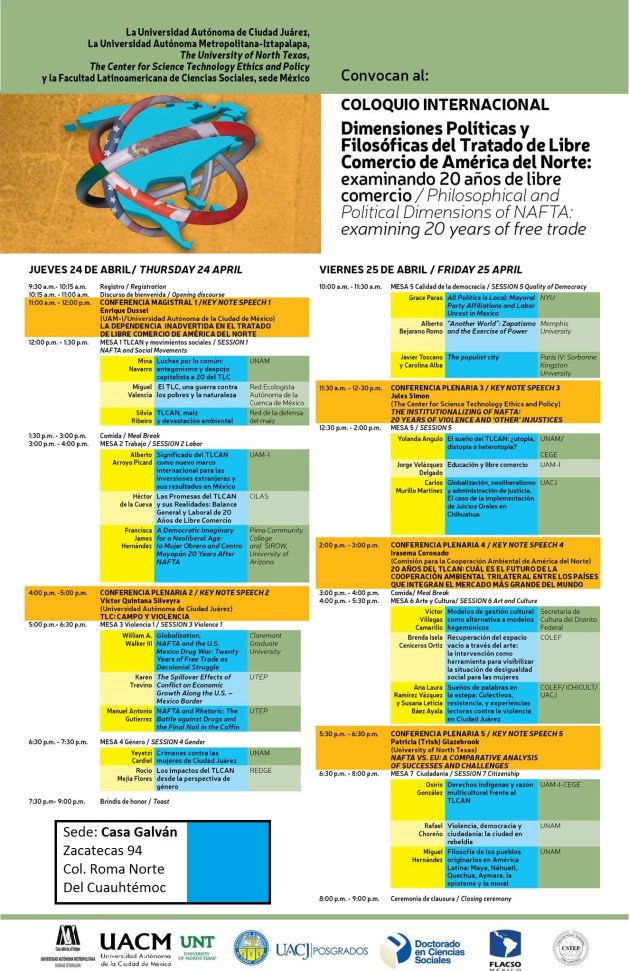 GLOBALIZATION, VIOLENCE AND SALVATION: TOWARD A TRANSMODERN POLITICAL THEOLOGY OF NEIGHBORLINESS AND RESISTANCE

“To be against globalization as such is like being against electricity.  However, this cannot lead us to resign ourselves to the present order of things because globalization as it is now being carried out exacerbates the unjust inequalities among different sectors of humanity and the social, economic, political and cultural exclusion of a good portion of the world’s population.” – Gustavo Gutierrez

Understood within an analytical framework and mediating theory of economic, political and cultural globalization, the purpose of this dissertation is to critically, socially and theologically reflect upon the violence and injustice that has been enacted and endured by people in Mexico and the United States in recent years (2008 to present) as a result of the so-called drug war.  To begin I will attempt to outline the various dimensions of the phenomenon of globalization and the drug war more specifically, the latter of which is presumed to epitomize major negative aspects of the former.  This part of the examination will rely on the work of several leading social scientists who have extensively studied the U.S. – Mexico underground political economy and its genealogy. Secondly, an ethical-political critique from a view of Christian salvation will be conducted as it pertains to this particular conflict, principally but not exclusively in its social sense.  My method and hermeneutical approach will be guided by what has been called the transmodern thought of Enrique Dussel and Hans Urs von Balthasar, respectively – Dussel with regard to historical and ethical-political concerns, and von Balthasar with attention to his theological aesthetics and the dramatic structure of his doctrine of salvation as symbolized by the theological significance he gives to Holy Saturday.

Dussel’s re-reading of the history of modernity as “coloniality” from a Latin American “border thinking” perspective, as well as his Levinasian and arguably Schellingian-Marxist interpretation of social relations will be the primary lens through which I will try to situate and appreciate the more particular problem of globalization and the drug war itself.  Subsequently, in an effort to sensitize Dussel’s approach to a view from “the eyes of faith,” it is von Balthasar’s meditation on the beauty of the Christ-form that will be appropriated in order to convey a less anthropocentric and more trans-temporal, thoroughgoing Christian theo-political imagination. The study will culminate in an attempt to synthesize several key contributions of Dussel and von Balthasar by drawing on additional soteriological and ecclesial insights from Dorothee Soelle, Jon Sobrino and Gustavo Gutierrez. It will be argued finally that only a properly historical-critical (Dussel), aesthetic and christocentric (von Balthasar) liberationist soteriology (Sobrino) of communion (Gutierrez) can confer the adequate theological and ethical vision of neighborliness – one that is necessary for the inspiration of faithful Christian and ecclesial resistance (Soelle) in this crisis and others.