Naturalism is not Enough: Or, Why Transcendence is not the Problem

[This blog post originally appeared at HomebrewedChristianity.com, and was written in response to the podcast linked below. LeRon Shults graciously responded on his website, and we continued to dialogue in the comments section there.]

There has been a great discussion in the comment section of the latest TNT episode where Tripp talks with LeRon Shults and Barry Taylor, both of whom I admire. Shults defends a form of radical theology and at one point even uses the term “atheist” to describe himself. His ontology is a strictly “naturalistic” one. It reminds me of Kester Brewin’s recent criticism of Rob Bell’s benevolent conception of the universe. Several people commenting in response to the conversation have asked why process philosophy or theology isn’t more attractive to Shults, or why it doesn’t pass the science test. This is a great question and a discussion worth having, but I want to make another observation.

END_OF_DOCUMENT_TOKEN_TO_BE_REPLACED

Shane Hipps on Belief, "religious Christianity" and the Bible today

In Church and World, Theology 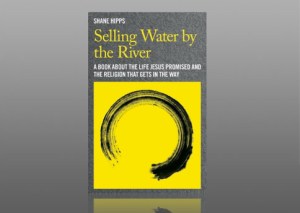 This from Shane Hipps’ latest book Selling Water by the River:

Ironically religious Christianity is often the purveyor of the very beliefs and fears that get in the way of the water.

Beliefs are an important part of any religion.  What we believe matters, but not for the reasons we may assume.  Our beliefs (or lack of beliefs) do not qualify or disqualify us from the river.  Instead, they determine how clearly we will see the river, which is always running just beneath our noses.  Some beliefs clear the way and give us high visibility, while others create a thick fog.  The distance between the river and us never actually changes.  What changes is how well we can see and accept it.

The “water” reference in the above quote and throughout the whole book is a metaphor for many things — God, the “source,” “life,” healing, truth or the salvation we all seek — and the one that guides us there is Jesus, but religious Christianity often gets in the way.  Hipps is not playing the “gospel vs. religion” game though that’s so popular with neo-reformed folks; nor is he even siding with the “spiritual but not religious.”  He continues:

I am convinced that many of the barriers to the water created by religious Christianity share a common source – the ways we have been told to understand and interpret the Bible.

The Bible contains sixty-six books, in dozens of literary genres, written by nearly as many authors, in multiple languages, over several thousand years.  The Bible is not merely a book, but an extensive library capable of conveying wide and brilliant truths.  The Bible is like a piano with a vast range of notes and capable of playing an endless array of songs.

In the last few centuries, Christian institutions have narrowed the range of notes it plays, resulting in a simple song easily learned and repeated.  But through time, repetition, makes any song, no matter how beautiful, lose its edge and interest.

The fresh becomes familiar and what was once powerful become predictable.  Familiarity breeds predictability, and this leads to boredom.

Today, we are in danger of believing that nothing new can come from the pages of this ancient book.

But the notes that have been neglected are waiting to resound with songs that still surprise.  Strings long silent are now eager to sing . . . [A]n effort [is needed] to let sound these neglected notes, to strike the dust from those strings and let a new song rise.

A song big enough for a complex world.

A song that wakes the weary from their boredom and sleep.

I agree with Hipps here, and I believe this new song can and should be sounded.  With regard to the church-world relationship and better engagement with society, however, I also think that we need to mine for songs to sound in culture and in life that corroborate the Bible — not just that stem from it.  And I’m sure Hipps would only say the same thing.  We need to look outside the Bible simply because the Bible is no longer as widely revered as it used to be.  Unfortunate as this may be, it’s a reality with which Christians must do a better job dealing.  There’s no “going back” on this front.

As such, we have to ask, what are the “sacred texts” about “water” that God has given us to discover beyond the holy writ?  Where and what are the sacred places and practices outside of our sanctuaries?   Whether and how we answer these questions is likely to significantly influence the future of Christian churches in North America, for good or ill.

What is the Gospel?

As in the previous post about salvation, no matter how familiar it is or how much we think we know it, I always find it worthwhile to ask the question again and again, What is the Gospel?  My friends over at interlocutors: a theological dialogue are doing just this.  Here is link to a recent post by Yi Shen Ma, a very bright guy who really helped me learn during my time in graduate school at Claremont.

This is what gets left out, I was realizing: not just left out of the national political debate but also left out of religious discourse.  Politicians talked about welfare – usually to blame and scapegoat – and occasionally made speeches about poverty.  There was no shortage of talk about the poor and social services from church leaders of all stripes.  But the experiences of people such as my volunteers, the texture and specificity of their incarnate lives, were missing from the story of what Christianity was like now in contemporary America.

And just as I’d looked for the unofficial truth, as a reporter, on the edge of things, I believed I was discovering , at the food pantry, our people’s significance to the real story.  They were on the margins of society, and often on the margins of the church, but their lives were full of meaning.  They threw light not only on the overlooked parts but on how the whole system worked.  These poor lives illuminated middle-class life – our anxiety, our reliance on managing and fixing feelings rather than having them, our desire to punish.  They made clear the limitations of religions that cast out every member whose reality didn’t fit inside church doctrines.  Their lives showed the profound resourcefulness and strengths of the weak.  The thing that astonished me sometimes – listening to tales of terrible damage, psychosis, loss – was not how messed up people could be but how resilient; how, in the depths of suffering, they found ways to adapt and continue.