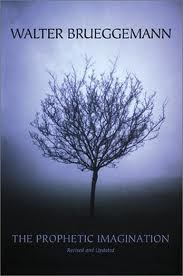 It is the crucifixion of Jesus that is the decisive criticism of the royal consciousness.  The crucifixion of Jesus is not to be understood simply in good liberal fashion as the sacrifice of a noble man, nor should we too quickly assign a cultic, priestly theory of atonement to the event.  Rather, we might see in the crucifixion of Jesus the ultimate act of prophetic criticism in which Jesus announces the end of a world of death (the same announcement as that of Jeremiah) and takes that death into his own person.  Therefore we say that the ultimate criticism is that God himself embraces the death that his people must die.  The criticism consists not in standing over against but in standing with; the ultimate criticism is not one of triumphant indignation but one of the passion and compassion that completely and irresistibly undermine the world of competence and competition.  The contrast is stark and total: this passionate man set in the midst of numbed Jerusalem.  And only the passion can finally penetrate the numbness.

The cross is the ultimate metaphor of prophetic criticism because it means the end of the old consciousness that brings death on everyone.  The crucifixion articulates God’s odd freedom, his strange justice, and his peculiar power.  it is this freedom (read religion of God’s freedom), justice (read economics of sharing), and power (read politics of justice) which break the power o the old age and bring it to death.  Without the cross, prophetic imagination will likely be as strident and as destructive as that which it criticizes.  The cross is the assurance that effective prophetic criticism is done not by an outsider but always by one who must embrace the grief, enter into the death, and know the pain of the criticized one.

— From The Prophetic Imagination, Walter Brueggemann

This understanding of the significance of cross was foreign to me until only a few short years ago.  It seems along the way we created a church culture in which the crucifixion was solely understand as either a substitutionary payment for sin (conservative) or a tragic ending to an exemplary life (liberal).  This message above, on the other hand, is deep, powerful, and compelling to anyone who has a sense that the world has gone awry and wonders whether God cares and has acted.  To the extent that we put faith in this story, we  can surely trust God’s answer as being one of judgment, solidarity, consolation and promise of a victory in the future hope of the coming reign of justice and peace.  Of course we also have an important responsibility in partnering with God to make this reign a reality.  I believe God will have to decisively act on our behalf for this hope to be confirmed, and that we will not be able to just rely on ourselves, but I also believe that our participation is critical.  This is the tension that disciples live in.

The prophetic imagination can have profound implications for eschatology if we really take it seriously.  What are the greatest threats to this promise?  Can we really just depend on God absolutely regardless of how we take care of creation and each other?  This is what many people seem to want to do instead of striving to eradicate the biggest problems we are facing – crises of energy, militarism (security), consumerism (prosperity), inequality, and spirituality – spirituality that actually engages the world in a systematically transformative way.  The proper response can be found, it seems to me, in a church setting that recognizes and appreciates this meaning of the cross – the criticism of royal/imperial consciousness – just as much as the one that many evangelicals grew up with about penal atonement.