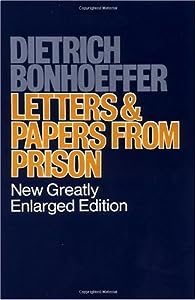 Cover of Letters and Papers from Prison

There’s a great resource for Bonhoeffer quotes from his Letters and Papers that can be found here.  I’m returning to Bonhoeffer right now somewhat in part because I’m teaching Christian Ethics, and he had a lot to say about this — about what it is and isn’t — but also because some friends of mine are reading through The Cost of Discipleship, and I’ve recently joined them to re-read it.  Of course the tension between Bonhoeffer’s earlier and later work is somewhat glaring at moments, as can be seen below.  The importance for me of these two particular quotes though is not so much that the words themselves have shaped me, but that some major elements of my on faith development and view of church, as a result of my experience and educational journey over the past few years, are reflected in them so well.

Hasn’t the individualistic question about personal salvation almost completely left us all? Aren’t we really under the impression that there are more important things than that question (perhaps not more important than the matter itself, but more important than the question!)? I know it sounds pretty monstrous to say that. But, fundamentally, isn’t this in fact biblical? Does the question about saving one’s soul appear in the Old Testament at all? Aren’t righteousness and the Kingdom of God on earth the focus of everything, and isn’t it true that Rom. 3.24ff. is not an individualistic doctrine of salvation, but the culmination of the view that God alone is righteous? It is not with the beyond that we are concerned, but with this world as created and preserved, subjected to laws, reconciled, and restored.What is above this world is, in the gospel, intended to exist for this world; I mean that, not in the anthropocentric sense of liberal, mystic pietistic, ethical theology, but in the biblical sense of creation and of the incarnation, crucifixion, and resurrection of Jesus Christ.

Our church, which has been fighting in these years only for its self-preservation, as though that were an end in itself, is incapable of taking the word of reconciliation and redemption to mankind and the world. Our earlier words are therefore bound to lose their force and cease, and our being Christians today will be limited to two things; prayer and righteous action among men. All Christian thinking, speaking, and organizing must be born anew out of this prayer and action…It is not for us to prophesy the day (although the day will come) when men will once more be called so to utter the word of God that the world will be changed and renewed by it. It will be a new language, perhaps quite non-religious, but liberating and redeeming – as was Jesus’ language; it will shock people and yet overcome them by its power; it will be the language of a new righteousness and truth, proclaiming God’s peace with men and the coming of his kingdom…Till then the Christian cause will be a silent and hidden affair, but there will be those who pray and do right and wait for God’s own time.

Hermeneutics and Praxis: Two Wrongs and a Right