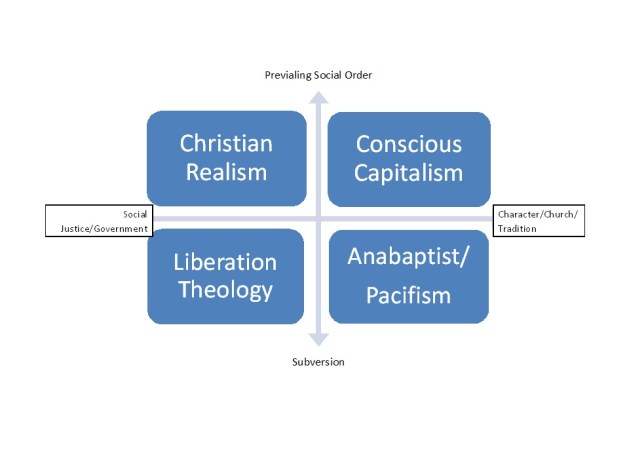 This post goes together with another that was recently made here at Homebrewed Christianity.

Conscious Capitalism – does not criticize the dominant social order but is concerned about trying to eradicate poverty, practice charity and generosity, and exhibit self-sacrificial love at the individual and ecclesial level so as to impact society and bear witness to a soteriocentric gospel.  Like the other views, there is usually a strong critique of consumerism.  Examples of groups in this camp include evangelical non-profit organizations like World Vision, Compassion International, International Justice Mission, and so on.

Christian Realism – sees the flaws and sin of the dominant social order – i.e., the global market and its hyper-financialization – but does not principally call for its transformation.  Instead it desires to work within so as to restrain (e.g., Keynesian fiscal policy or democratic socialism).  Violence might be necessary, and Christians are naïve to think they can avoid it, but it is still evil.  Christian realism therefore recognizes that non-violence is the ideal even if it is judged to be impractical.  I think the Roman Catholic Church probably fits here most of the time. (Is this non-violence only judged to be impractical, however, when the judgment is made from the point of view of those in power?)

Liberation Theology – offers a fundamental critique of the dominant social order from the standpoint of those on the margins and strives to realize greater justice and peace here by overcoming systemic poverty and oppression through macro as well as micro-political-economic means.  Violence is not justified, but the causes that support liberation are, which may or may not require violence.  There is however such thing as a non-violent liberationist perspective, with which I want to identity myself, and this is why I have not organized the chart above in terms of violence but rather in terms of social justice.  I also prefer the word “resistance” to liberation.  In this way, liberation can be understood more with respect to fidelity to God’s will than to liberation as such.  It’s ok, in other words, if liberation isn’t always achieved, and the goal is not to replace one superstructure with another (e.g., capitalism vs. socialism, etc.).

Anabaptist/Pacifism – shares with liberation theology a fundamental critique of the dominant social order but is concerned with subverting it at the ecclesial and micro-economic level instead of at the “coercive” level of formal public policy and law enforcement.  It privileges the Christian concern for spiritual formation, community, and discipleship, especially in light of rampant cultural individualism (a problem that many other non-european-descendent cultures don’t seem to have as much).  Other groups need not necessarily be opposed to these things.  The Anabaptist/Yoderian position simply makes non-violence the central ethical principle.  Another important commonality that Anabaptism has with Liberation Theology is the assumption that Christians and the Church should expect to have “minority status” (i.e., post-Christendom). [Note: Further, I think it’s important to avoid the distinction between Liberation Theology and Anabaptism that makes the former about “materialism” and the latter “spirituality.” One can easily imagine, I would argue, a materialist pacificism or a spiritualist liberationism.]

Even though there is much that can be praised about the best that conscious capitalism and Christian realism have to offer, neither is adequate, in my view, due to the respective acquiescence to euro-american-centrism and a failure to align sufficiently with the interests of those on the periphery who have not benefited from the societal machine of “excessive prosperity for a few.”  Evangelical piety is admirable, and Niebuhrian ethics is right in much of what it says.  But both are too implicated by their proximity to the “center” and by a lack of urgency to resist (I think James Cone’s newest book gives a good, appreciative but critical overview of Niebuhr).

About this notion of the societal machine, I like how Brian McLaren has depicted this problem in his book Everything Must Change: 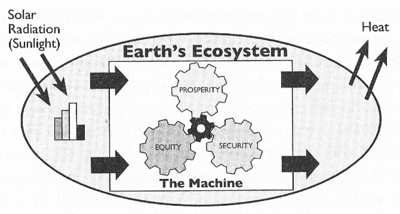 As each “crisis cog” gets going too fast, the heat and waste produced rises to unsustainable heights.

In the context of the mostly white, North American middle class and its churches, the Anabaptist/Yoderian take is very compelling, and I would gladly call it a faithful Christian response in our time.  In fact it is the one that I for one am most often capable of embracing! I do not write this as a disinterested observer, of course, but as someone slowly, and very imperfectly trying to put into practice the takeaways of such observations with others in my life.  The Anabaptist/Yoderian view does not go far enough, however, in translating the gospel for the excluded majority. (Maybe this is ok though, because it seems to me that the excluded majority have been perfectly capable of translating the gospel for themselves.)

Here’s how I imagine this same schema being depicted for a few different church groups today: 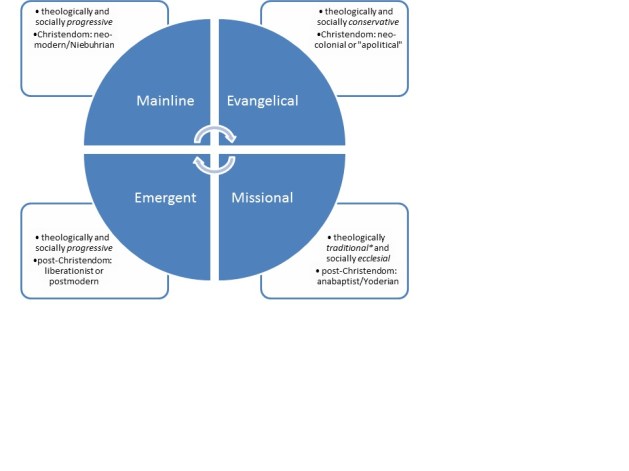 I would say in summary that, just as each of the other three groups have a variety of expressions that I have not fully appreciated here, so too does the liberationist hermeneutic have better and worse versions.  In light of the call to be participants in God’s work of making all things new, however, it is my contention that only an ethic that takes seriously and starts from the particular material suffering of the victims of history can offer a thoroughgoing Christian hope in the context of globalization and in the face of all the challenges this age presents (ecological degradation, geopolitical wars for economy stability, and poverty/disease on a massive scale – all of which is an offense to God).  There are eschatological questions remaining here, but I do not think one has to give up eschatological hope or work with an overly realized social gospel to take this position.

The Universality and Particularity of the Gospel: Confessing Christ in Context

Leonardo Boff on The Eucharist and Love of Neighbour