How (not) to Speak (about the Power) of God: Some Christmas Reflections on Divine Action 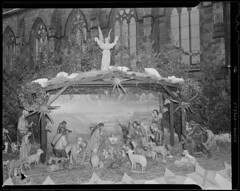 [With a few revisions, the following is a partial cross-posting from an entry I made last week at Homebrewed Christianity in response to this podcast episode.  The main purpose of what I wrote was to call into question what struck me as a discourteous representation of how Christians have talked about the nature of God’s power for the vast majority of church history.  Bo Sanders kindly pushed back, and then Tony Jones responded to both of our posts and the podcast by asking some follow-up questions for process theology, echoing at least some of my concerns.  Finally, my friend and former classmate Austin Roberts gave these pithy answers for Tony.]

As finite beings, all of our language is only fit to describe finite reality.  This leads some to conclude that all attempts to say anything positive about God are in vain.  But those like Thomas Aquinas for example, and Pseudo-Dionysius, insisted instead that one could indeed ascribe certain attributes to God by following a process of affirmation, negation, and remotion, emanation, or re-reaffirmation when talking about God (e.g., “God is like a parent in some respects, but only in limited correlation or proportionality — not directly or univocally”). This method of theology became known as the via analogia, or the “analogical predication of divine names.”  Thomas also has an account of God’s agency in the world in terms of secondary causality, which is a non-zero sum way of granting freedom to creation and human agents for participation in the purposes of God without infringing upon natural ends.

In other words, while it is fitting to say that God loves us like parents love their children, this love, and this parenthood, are not im-mediately comparable to our finite and human experience of love and parenting.  All the more so when we get into specific human experiences like kids playing in traffic.  The idea that God could intervene to stop traffic is not the same kind of intervention that Christians hope for in the resurrection or in the eschaton (I would not even call it “intervention” — more on this below).  The same goes for talking about God as a “ruler,” or as anything else.  Thus, when assessing and the nature of God’s character with respect to God’s power, we cannot rely too heavily on any one human analogy.  Only in the resounding overflow or of a plurality of names does the nature of God become even partially revealed.  Thus, whatever one makes of traditional accounts of God’s omnipotence, it does not equal “arbitrariness” or Caesar-style trumping power.  I know this doesn’t make things any easier or solve our God-talk problems.  The point is, while I think Christians can and even need to disagree with and reform classical theism in certain respects, we must remember to preserve the integrity (not infallibility!) of the intentions of the best of the tradition rather than dismissing its doctrines as necessarily having distorted the character of the God of Jesus Christ for all the centuries before ours (though I’m not accusing anyone in particular of consistently doing this, despite the polemical tone).

Secondly, The problem of evil has troubled me deeply, and still does.  I do not feel resolved about it at all.  My dissertation is largely about this very subject.  It is one of the main reasons people reject traditional understandings of God’s power, and again, there may be some grounds for rethinking the tradition here.  But I think our refusal to tolerate a fair amount of mystery when it comes to explaining suffering has as much to do with our anthropocentric view of reality as it does with any possible deficiency in God’s character or power.  Much as I want it to, God’s goodness does not necessarily depend on what is good for humans and from our point of view right now (I realize this argument could be turned around and used against “interventionist” theologies as well — I mentioned this ideological risk in the podcast episode).  I say this as someone who is as existentially disturbed by meaningless horrors in history as the next person.  I do not mean this to be a pious refusal of all speculation. I just think it’s an important check on speculation.  Some contemporary theologies characterized by process and postmodern thought are good about critiquing modernity’s “turn” to the human subject, but we still have some modern arrogance to shake off.  The classical tradition was far less anthropocentric than we are — they were more theocentric — even though their universe was thought to be infinitely smaller and ptolemaic!

Third, process theologians like to recite the Philippians 2 hymn, but only the first half of it.  Yes, God’s power is most demonstrated in the self-emptying love of Christ on the cross.  In this sense, God can safely be called a fellow-suffer who understands.  And on this same cross, the power of Caesar is judged, criticized, and exposed as fraudulent.  But only in the resurrection is the power of Caesar truly undermined, which Paul attests in “part two” of the Philippians hymn.  And according to Paul, the power of God is disclosed not as weakness, but in weakness – in becoming weakness, namely.  For without decent, there could be no ascent (metaphorically).

Similarly, the reign of God is known not as much by non-coercive power, as by power from below – power from the margins.  There is a difference here. I am weary of any dualism between nature and super-nature as well, but if the resurrection isn’t meant to be a coercive rupture of the “as is” structure of reality, I don’t know what is.  I suggest, therefore, that Christians are better off not primarily by taking issue with the idea of God having coercive power as such, but with God having top-down power.  It’s a false binary if we’re forced to choose between a Caesar-God and a strictly persuasive God who can’t accomplish her purposes apart from human consent (i.e., as if God asks for permission to redeem…).  God’s top-down action is weak, but bottom-up, it’s strong, transformative and quite forceful.  This doesn’t need to mean it isn’t loving.  Nor does it imply violent retribution, despite what some ahistorical readings of Revelation would have us believe.  Somewhere herein lies an all-important distinction that might just make a way for a real eschatology without giving up the integrity of the physical universe.

So in the spirit of Christmas — given a major theme is the meaning of the incarnation and the picture given in the gospel narratives’ of Jesus’ poor, insignificant, outsider and genocidal birth setting — I propose we think of resurrection and eschatology (how Christ will finally “reign”) as emergent consummation.  The word “consummation” is a fairly traditional way to talk about the fulfillment of God’s purposes in time, but without the patriarchal baggage carried by other words like “triumph” or even “return” (e.g. “return of the king”).  “Emergent,” on the other hand, signals the idea of bottom-up and non-violent force that can nonetheless hardly be stopped.  Maybe this could be a better way then to talk about divine power without relinquishing the effectiveness of divine action.

Explaining the Theological Signficance of my Dissertation