MLK on the Church

Excerpt from the archive repost on the Internet Monk Blog, in Letter from Birmingham Jail:

In deep disappointment, I have wept over the laxity of the Church. But be assured that my tears have been tears of love. There can be no deep disappointment where there is not deep love. Yes, I love the Church; I love her sacred walls. How could I do otherwise? I am in the rather unique position of being the son, the grandson, and the great grandson of preachers. Yes, I see the Church as the body of Christ. But, oh! How we have blemished and scarred that body through social neglect and fear of being nonconformists.

There was a time when 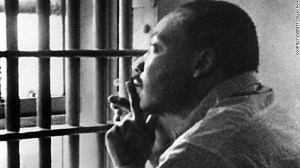 the Church was very powerful. It was during that period when the early Christians rejoiced when they were deemed worthy to suffer for what they believed. In those days the Church was not merely a thermometer that recorded the ideas and principles of popular opinion; it was a thermostat that transformed the mores of society. Wherever the early Christians entered a town the power structure got disturbed and immediately sought to convict them for being “disturbers of the peace” and “outside agitators.” But they went on with the conviction that they were a “colony of heaven” and had to obey God rather than man. They were small in number but big in commitment. They were too God-intoxicated to be “astronomically intimidated.” They brought an end to such ancient evils as infanticide and gladiatorial contest.

Things are different now. The contemporary Church is so often a weak, ineffectual voice with an uncertain sound. It is so often the archsupporter of the status quo. Far from being disturbed by the presence of the Church, the power structure of the average community is consoled by the Church’s silent and often vocal sanction of things as they are.

But the judgment of God is upon the Church as never before. If the Church of today does not recapture the sacrificial spirit of the early Church, it will lose its authentic ring, forfeit the loyalty of millions, and be dismissed as an irrelevant social club with no meaning for the twentieth century. I am meeting young people every day whose disappointment with the Church has risen to outright disgust.

Maybe again I have been too optimistic. Is organized religion too inextricably bound to the status quo to save our nation and the world?