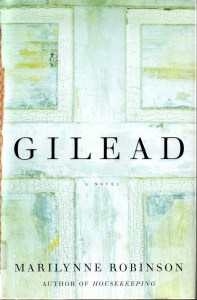 When my father found his father at Mount Pleasant after the war ended, he was shocked at first to see how he had been wounded. In fact, he was speechless. So my grandfather’s first words to his son were “I am confident that I will find great blessing in it.” And that is what he said about everything that happened to him for the rest of his life, all of which tended to be more or less drastic. I remember at least two sprained wrists and a cracked rib. He told me once that being blessed meant being bloodied, and that is true etymologically, in English – but not in Greek or Hebrew. So whatever understanding might be based on that derivation had no scriptural authority behind it. It was unlike him to strain interpretation that way. He did it in order to make an account of himself, I suppose, as most of us do… (p. 36)

I got pretty good at pretending I understood more than I did, a skill which has served me through life. I say this because I want you to realize that I am not by any means a saint. My life does not compare with my grandfather’s. I get much more respect than I deserve. This seems harmless enough in most cases. People wan to respect the pastor and I’m not going to interfere with that. But I’ve developed a great reputation for wisdom by ordering more books than I ever had time to read, and reading more books, by far, than I learned anything useful from, except, of course, that some very tedious gentlemen have written books. This is not a new insight, but the truth of it is something you have to experience to fully grasp. (p. 39)

One sermon is not up there, one I actually burned the night before I had meant to preach it. People don’t talk much now about the Spanish influenza, but that was a terrible thing, and it struck just at the time of the Great War, just when we were getting involved in it. It killed the soldiers by the thousands, healthy men in the prime of life, and then it spread into the rest of the population. It was like a war, it really was. One funeral after another, right here in Iowa. We lost so many of the young people. And we got off pretty lightly. People came to church wearing masks, if they came at all. They’d sit as far from each other as they could. There was talk that the Germans had caused it with some sort of secret weapon, and I think people wanted to believe that, because it saved them from reflecting on what other meaning it might have.

The parents of these young soldiers would come to me and ask me how the Lord could allow such a thing. I felt like asking them what the Lord would have to do to tell us He didn’t allow something. But instead I would comfort them by saying we would never know what their young men had been spared. Most of them took me to mean they were spared the trenches and the mustard gas, but what I really meant was that they were spared the act of killing. It was just like a biblical plague, just exactly. I thought of Sennacherib . . . and I said that their deaths were a sign and a warning to the rest of us that the desire for war would bring the consequences of war, because there is no ocean big enough to protect us from the Lord’s judgment when we decide to hammer our plowshares into sword and our pruning hooks in spears, in contempt of the will and grace of God. (pp. 41-2)

My grandfather told me once about a vision he’d had when he was still living in Maine, not yet sixteen. He had fallen asleep by the fire, worn out from a day helping his father pull stumps. Someone touched him on the shoulder, and when he looked up, there was the Lord, holding out His arms to him, which were bound in chains. My grandfather said, “Those irons had rankled right down to His bones.” He told me that as the saddest fact, and eyed me with the one seraph eye he had, the old grief fresh in it. He said he knew then that he had to come to Kansas and make himself useful to the cause of abolition. To be useful was the best thing the old men ever hoped for themselves, and to be aimless was their worst fear. I have a lot of respect for that view… (p. 49)

Memory can make a thing seem to have been much more than it was. But I know she did look right into my eyes. That is something. And I’m glad I knew it at the time, because now, in my present situation, now that I am about to leave this world, I realize there is nothing more astonishing than a human face. Boughton and I have talked about that, too. It has something to do with incarnation. You feel your obligation to a child when you have seen it and held it. Any human face is a claim on you, because you can’t help but understand the singularity of it, the courage and loneliness of it. But this is truest of the face of an infant. I consider that to be one kind of vision, as mystical as any. Boughton agrees. (p. 66)