Silence Plumbs the Depths of Suffering, Priesthood and Apostasy

[This post originally appeared on the Missio Alliance blog.]

In his work, Varieties of Religious Experience, William James makes a distinction between the spiritual posture of what he calls the “sick soul,” on the one hand, and “healthy-mindedness,” on the other. Neither label is necessarily positive or negative.

By “sick soul,” James means someone for whom human suffering and injustice tend to be an inescapable and overwhelming problem. There are no answers for it, and finding a state of “rest in God” can be very difficult for those with this disposition. By contrast, the “healthy-minded” person of faith is able to cultivate a deep sense of peace and trust that God is good, and all manner of things will be well. Evil for the healthy-minded is like a lie that poses no serious threat.

Of course, many of us probably oscillate between these two places from time to time, and certainly the latter is ultimately more desirable from a Christian point of view. But rush too quickly to healthy-minded religion, and we are sure to lose the prophetic heart of the biblical narrative. We see examples of both throughout Scripture, each one given legitimacy as a earnest stance before God — e.g., “How long Oh Lord?” (Psalm 13) vs. “I have stilled and quieted my soul” (Psalm 131). But the movie Silence, much like the book, does not make the still and quiet of healthy-mindedness very easy to come by.

I am no expert film critic, so I leave that job to others. (For reviews of the production and casting quality, see this write-up by my friend Rod Machen, or this excellent, more thorough one with spoilers.) Nor will I give a summary of the plot and characters here. My interest in Silence is more about the theological and existential themes that are developed throughout, and having just read the book, I was eager to see how Martin Scorsese would adapt the story.

There’s almost nothing “Hollywood” about Silence. It isn’t “entertaining,” and it doesn’t mean to be. As another reviewer commented, this is not the kind of movie you “like” or “don’t like.” It’s one that you “experience and then live with.”

Every scene makes you sit and watch longer than you want to, but without overindulging. The violence, though brutal, isn’t depicted in a sadistic or gory way. That would distract from what’s really going on. Scorsese wants to draw viewers in to the devastation of the story, not shock them with grotesque imagery.

The miserable condition in which the priests and peasants find themselves leads them to take comfort in the most vital and basic of things: sunlight, food of any kind, a smile, camaraderie, or even just simple religious icons. One feels both admiration for their courage and empathy for their plight. What appears to sustain these Christians, in addition to their faith, is the solidarity that each shares with the other in their suffering.

It will be no surprise to viewers to remember that Shusaku Endo wrote Silence in the 1960s. The “Death of God” movement of the day shows up in several of Padre Rodrigues’s (Andrew Garfield) inner monologues—he is the protagonist of the story. In some ways reminiscent of Elie Wiesel’s Night, written a decade earlier, the account could scarcely be imagined in the Western Judeo-Christian mind prior to the Holocaust.

Endo’s Silence, however, has a different feel to it than Wiesel’s Night. Whereas the Nazis sought to systematically exterminate an entire people group, the Samurai and Japanese ruling elite do not hate the Portuguese or even their fellow Japanese who have converted to Christianity. They merely want to root out Christianity itself. They claim to have studied it but determined that it is dangerous and threatening to their culture and way of life. This in no way excuses their cruel tactics, of course, but similar to how, say, the Gospel of John makes Pontius Pilate sound like a “reasonable” man, Silence manages to humanizes the Japanese persecutors despite their brutality.

Still, there are moments eliciting nothing but sheer anger and disgust at the sight of such terrible pain being inflicted upon the poor Japanese Christians. Even as a Christian, one can’t help but wonder, was it really necessary for these people to be converted? Was the salvation of Japanese peasants actually at stake if the gospel wasn’t brought to them in the first place? Couldn’t the God of Jesus Christ have mercy on them, regardless?

Doubt, Betrayal, and the end of “Healthy-Mindedness”

And this raises perhaps the most obvious and pressing theological predicament of the film. It’s the same one Rodrigues himself asks: “God heard their prayers, but did he hear their screams?” Such a incisive question could also call to mind Bonhoeffer’s famous line from his Letter and Papers: “Only a suffering God can help.”

Another probing provocation by Silence is about the role of a pastor or priest. There are a number of gut-wrenching scenes throughout the film that get directly at what it means to intercede or atone for someone else. If Jesus is the great high priest who substitutes himself to take away our sin, so too do Rodrigues and Garrpe (Adam Driver) yearn to mediate between their new Japanese brothers and sisters and the suffering imposed on them by the infamous Japanese “Inquisitor” named Inoue. In heartbreaking fulfillment of priestly duty, these good shepherds love and defend their sheep in the face of any harm.

But maybe the most difficult faith question of all comes when Rodriques is finally reunited with the fallen priest, Father Ferreira (Liam Neeson)—his former Catholic teacher and confessor, who has now renounced the faith and become a Buddhist scholar. They even gave him a new name! 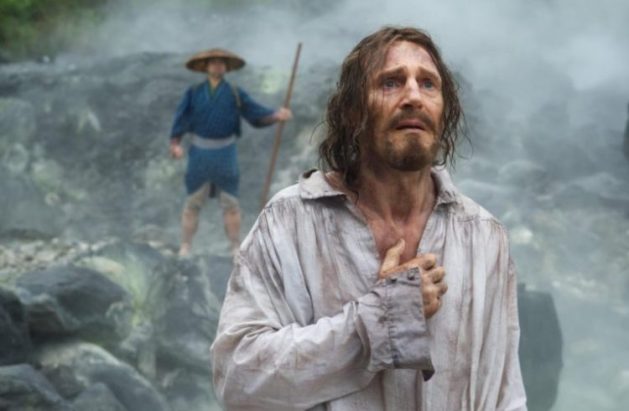 Ferreira didn’t initially commit apostasy because he doubted his Christian God. He did so to end the suffering of fellow Christians. Eventually, however, he learns Japanese and begins to think that many of the Japanese “Christians” weren’t genuine converts after all. They may have conflated Jesus-worship with worship of the sun (confusing the translation of “son” and “sun”). Ferreira argues with Rodrigues about this and insists that the Japanese cannot imagine a transcendent God that exists beyond nature itself. Ferreira contends that the martyrs died for priests like himself and Rodrigues, but not for Christ.

Rodrigues judges Ferreira’s words as blasphemous and disgraceful at first, but Scorsese concludes the movie with some creative license, departing in imaginative detail from the novel, and leaving the viewer to decide for herself whether Rodrigues remains a believer. Whatever his destination, there’s little doubt that Rodrigues’s journey disabuses him of any “healthy-minded” religious condition — one that for Rodrigues stemmed from his naive assurance that everything God wills or allows to happen is for the good. Rodrigues was ready for martyrdom, but not one like this.

So Silence is silent about many things: is renouncing one’s faith in order to save others from suffering merely a formality, as the Japanese interrogators suggest? Is the cost of faithfulness too great if someone else has to bear it? Would it have been better for the Jesuits never to have stepped foot on Japanese soil? It seems the Japanese political leaders figured out how to force a choice between the fidelity of betrayal and heretical orthodoxy. There is no resolution or solace either way.

No Answers in Silence

If you’re expecting a movie that will strengthen your faith, this may not be the one. I also suspect the film (and book) has its shortcomings. But you should still see it. Missional Christians have something important to learn from not only the trials and tribulations of the Catholic missionaries, but from both the resistance to and embrace of Christianity by the Japanese. What is the responsibility of the evangelist when the lines between syncretism, gospel contextualization and mere proselytization become so blurred? The movie doesn’t give answers. It only demands contemplation. Such is the holiness and ambiguity of Silence.

And yet, Scorsese still leaves room for faith. Jesus himself walked the path of Godforsakenness. Jesus himself came to be trampled on and renounced for our sake. What if Jesus himself is the one who breaks God’s “Silence”?

What We’re Missing When We Call Jesus “Teacher” or “Rescuer”

Abortion, The Women’s March, and other Uncontroversial Things: A Couple’s Perspective