When Schmemann argues that the liturgy itself expresses a concrete, primary theology, he also specifies what the nature of that theology is. Speaking of the worship of the early church, he says, “It was born out of the Christian vision and experience of the World, the Church, and the Kingdom, of their fundamental relationship to one another. That it so say, in the very act of assembling (church) on the Lord’s Day (world) to break bread (kingdom), the church is concretely expressing its understanding of and realizing the intimate connection between church, kingdom and world. But this fundamental relationship can be maintained only if the church does not lower the eschatological tension of living in this age and in the age to come. Eschatology sustains the mission of the church. The moment it resolves the tension either by becoming totally immersed in this world or by divorcing itself from the world, it ceases to be the true hope of the world, even when it is involved in all sorts of “mission” activities and programs. 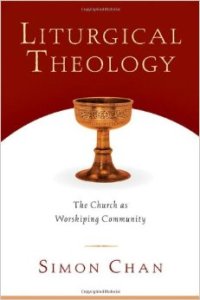 In the liturgy, the church straddles the kingdom and the world and maintains its dual orientation toward both. Von Allmen compares this dual orientation to the heart’s pumping blood to keep the body alive. At worship the church keeps a “diastole” beat toward the world and a “systole” beat toward God. These two poles, Von Allmen further argues, are preserved in the application of two key terms to the church’s worship: Eucharist and Mass. Eucharist “connotes . . . a movement . . . of gathering together, of assembly to become an offering of praise for that which God has does in Jesus Christ for the world’s salvation.” Mass, on the other hand, is the movement of going into the world when the celebration ends. “These two words describe the very movement of the Church in the world, the pulsation of her life in history.” The Supper is the “center” from which the church goes out to the world and to which it returns from the world with its “harvest” to offer to the Lord.

If we use different imagery, the liturgy may be compared to a journey – a journey from this world to the heavenly kingdom and back to this world. In the language of the liturgy, Word and sacrament are bounded by two other acts: the gathering and sending forth. As Christians leave the world to come together, they are “on their way to constitute the Church . . . to be transformed into the Church of God.” The biblical paradigm for this journey is the Mount of Transfiguration. The disciples separated themselves from the world and ascended the mountain with Jesus Christ and then returned to serve. But the basis is the ascension of Christ. In the eucharist prayer (the anaphora) the church is raised up to heaven to join in the heavenly liturgy: “We have entered the Eschaton, and are now standing beyond time and space.” It is from there that the mission of the church begins; from there that Jesus set the Holy Spirit to constitute the church as his Spirit-filled body; from there that, after being give spiritual food, the church returns to the world – back “time” – to love and serve the Lord. pp. 82-3

Bonnie Honig on the Promises of the Paradox of Politics, Linear Time, and Re-interpellation