Revelation 21-22: Our Hope for “The Healing of the Nations” — Love Alone is Credible 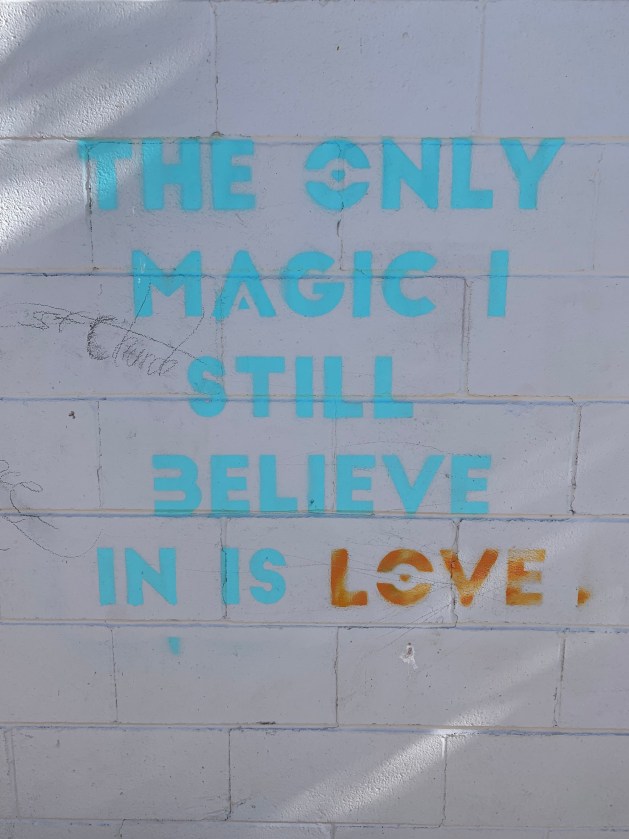 There’s an intriguing phrase spray painted on the back side of Christ’s Church’s building here on the southeast corner facing Cenote the coffee shop. Some of you may have noticed it. It’s one of those graffiti tags that’s very tasteful and that you can find elsewhere around the city. There are pictures of it online, particularly in the downtown and Central Austin area.

But here’s what it says, if you haven’t seen it:

“The only magic I believe in is love.”

Now, we didn’t write this there, but we also haven’t covered over it or tried to wash it off. It’s just there.

And I think there’s something to what this statement is getting at. Even if it’s also meant to probably criticize much of Christianity and organized religion, or even belief in the supernatural altogether — there’s also a way in which it’s making quite the claim and confession to believe in love. To believe in love.

One of the greatest theologians of the 20th Century and who has influenced me is someone by the name of Hans Urs von Balthasar, who is a Swiss-German Catholic figure. And he wrote way too many books. He was one of the prolific theologians in church history. 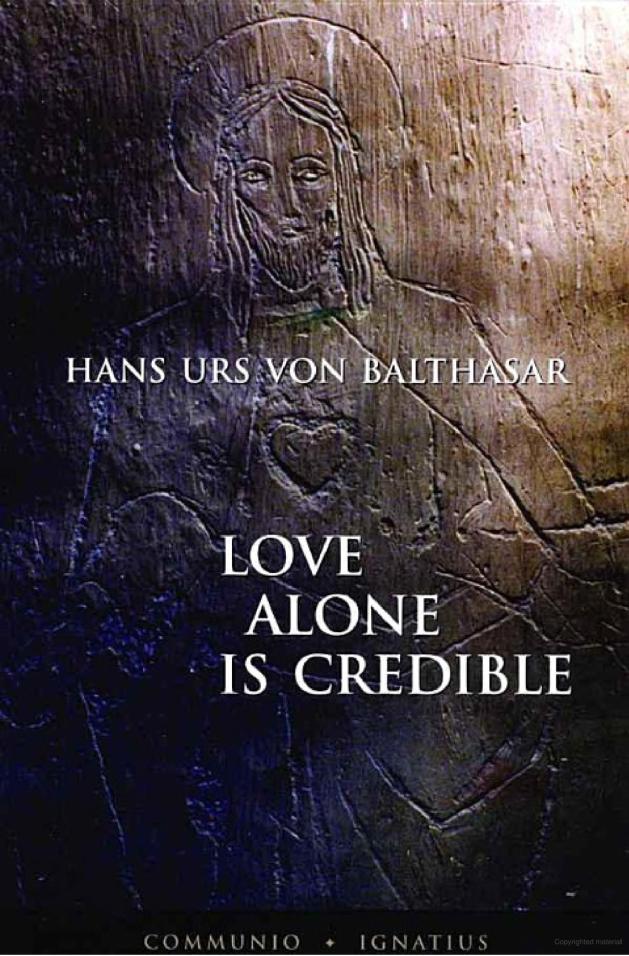 But he wrote one book that was something like a concise summary of his thought, of all his other works even. And it has the title, Love Alone is Credible. And Balthasar was a thinker who went to great lengths to explain what he meant by love, biblical Christian love that we can only know in Christ, and yet, that title, Love Alone is Credible, kind of like to spray painted quote on the building, has this provocation to it, and I think that was intentional. It’s an invitation to take claim of love, and of love’s reality, love’s possibility, to take it quite seriously. Because it can’t be taken for granted. Or it ought not to be.

Because to believe in love in this world, is no small thing, is it. It’s a big thing. It’s a very difficult thing to trust in something like love in this life. And all the more so if what we’re talking about isn’t merely love between two people — whether that’s romantic love, or brotherly-sisterly love, or familiar love — but love that is part of something bigger than us, something universal, love that has its origin in a transcendent source. Love that’s part of a bigger story.

Indeed, I think the audacious claim of the book of Revelation, and of much of the Bible, is precisely this: that final judgment, final justice, final truth, is finally, based in love. A love that is stronger and more lasting than sin, and death, and suffering. To believe in that kind of love is a big deal. Yes, all of hope, all of our courage, all of our longings, depend on it, and find their end point in it.

A popularizer of some of Charles Taylor’s work, says it this way:

“The secular age is a level paying field. We’re all trying to make sense of where we are, even why we are, and it’s not easy for any of us.” — James K.A. Smith, How (not) to be Secular

Now, you may not feel that way. It’s unlikely that everyone in this room can completely identify with that statement. And some of it depends on age, cultural background, and so on. But I do think it’s fairly clear that more and more people feel this way about their beliefs in general — even Christians, and it’s something that I believe we can and should be honest about, even in our worship, and even in our following of Jesus.

I know that I feel this way. I’ve been a Christian as long as I can remember, and I’ve never really had what I would call, necessarily, a crisis of faith, necessarily. And yet, this description resonates with me. I feel the doubt and the force of an outlook that assumes the future is unknown. The future is uncertain, undetermined, and up for grabs. That outlook feels like it’s the default sometimes for me.

Have you noticed some of the trends in pop culture over the past couple of decades around this question of the future? It’s not totally new, people have always wondered, right? But there’s an increased fascination these days, pretty obviously.

The number of movies, novels, video games, and now even real attempts through artificial intelligence or space travel to confront a future where earth is either left behind or taken over robots, aliens, zombies…

It’s dystopian rather than utopian vision of things usually. And this a new trend as well. We used to be more utopian. But now it’s more dystopian.

And I don’t mean to paint a rose-colored picture of the past. There were many things about the past that were not good. But the outlook was more hopeful even admit the great struggles — the Cold War, the Civil Rights movement, for instance. Think about the figures of Cesar Chavez or Martin Luther King, Jr., and what he represented. The Civil Rights movement was a movement rooted in hopefulness about the future, but also hopefulness about humanity. That seems absent today, or at least very thin.

As a parent of three young children, I think about this a lot, as I know many of you do too. What kind of future awaits them?

It’s not uncommon today for adults, and even married adults, to seriously question whether they should plan or try to have children, because to them, the future looks so bleak. Or, others calculate the number of children they should have —assuming they have any control over that — based on what we estimate the planet can sustain, given the trajectory of the current population.

But despite our pessimism, despite our cynicism, we’re a people, y’all, humanity that is, we’re a people bent toward utopia. We can’t avoid it. We long for it. So that even our dystopian imagination — fantasies, novels — are an attempt, in many ways, to cope with the disillusionment of the unrealized hopes and dreams of the utopian future we once thought possible.

It’s like, as a society, we’re a people in Lament — collectively. We’re grieving and we’re processing the loss of a vision for a better world. And we’re not dealing with it well very well. It’s not pretty. We’re in a state of despair.

But what’s the answer to this? Do we just need to swing back to the other end of the pendulum and become glass half-full instead of glass-half empty people? Do we simply shake off our negativity and return to the days of confidence, optimism, and positive thinking about the future?

No, I don’t think so. Because we’re tried that already. It was called modernity, and it placed trust in ourselves — in human progress and achievement. Whether through economics, science, technology, or a political system, this Eurocentric outlook did not finally deliver the hope and the future that we thought it would.

The gospel reading for today from Luke 18 reveals the problems with this approach. Like the Pharisee standing confidently before God, he was basing his optimism on his own ability to carry out good deeds. The tax collector, on the other hand, knew that his only chance was total reliance on God’s goodness and mercy.

So what is the picture and the alternative vision that Revelation 21-22 gives us of this future that depends entirely on God?

“…the Lord God Almighty and the Lamb are its temple. 23 The city does not need the sun or the moon to shine on it, for the glory of God gives it light, and the Lamb is its lamp.”

In Ch. 22, it goes on to describe the river of the water of life flowing down the middle of the great street of the heavenly city. This river nourishes trees of life that bear twelve crops fruit, yielding every month — not once a year, not twice a year, or even four times a year — every month. [this one can be hard for post-industrial folks to relate to, but think about what this is saying to the farmer in antiquity, the poor, the peasant, or any small-scale agrarian society!]

And then the leaves of this tree or these two trees of life are for the healing of the nations… (22:2).

I haven’t been able to go very long without thinking about Uvalde school shooting since it happened, until just a couple weeks ago when a similarly horrific happened in a daycare center in Thailand. And I don’t need to recount the details here. But the event was unthinkable. 24 children killed. 12 adults. The perpetrator was a parent of one of the children at the daycare.

2 See, darkness covers the earth
and thick darkness is over the peoples,
but the Lord rises upon you
and his glory appears over you.

3 Nations will come to your light,
and kings to the brightness of your dawn.

4 “Lift up your eyes and look about you:
All assemble and come to you;
your sons come from afar,
and your daughters are carried on the hip.

5 Then you will look and be radiant,
your heart will throb and swell with joy…

[It concludes]  The Lord will be your light, and your days of sorrow will end.

The slain lamb who is now crowned victorious and seated on the thrown, derives his authority not only from God on high, but from the depths to which he was willing to go. From the separation, foment, and rejection that he experienced, and from the vengeance that he refused to exact.

You know, sometimes Christians get criticized for pie in the sky faith. For being too other worldly in their belief. And sometimes this criticism is fair.

What did Karl Marx say? Religion is the opium of the people. It pacifies and suppress anger and what would otherwise be uprising and resistance to exploitation and so on.

Howard Thurman once spoke out against this criticism. He said that, rather than pacifying, the African American spirituals, for example, gave hope and endurance that even the cruelest condition couldn’t crush.

“That is why faith, wherever it develops into hope, causes not rest but unrest, not patience but impatience….Those who hope in Christ can no longer put up with reality as it is, but begin to suffer under it, to contradict it. Peace with God means conflict with the world… for the goad of the promised future stabs inexorably into the flesh of every unfulfilled present.”

Jürgen Moltmann, Theology of Hope: On the Ground and the Implications of a Christian Eschatology

So yes, we hold fast to this hope. We cling to it desperately. We believe in it even when our belief is weak and tepid and beat up. We believe nonetheless.

And this belief sustains us. It holds us. It energizes and animates are faith and our practice of following Jesus in a world that doubts.

Nothing else is credible save the love of God in Jesus Christ.

We remember and pray and sing those words from Psalm 84:

How lovely is your dwelling place,
Lord Almighty!

My soul yearns, even faints,
for the courts of the Lord;
my heart and my flesh cry out
for the living God….Better is one day in your courts
than a thousand elsewhere…

In the name of the Father, Son, and Holy Spirit. Amen.

A Sermon on Faith, Wealth and Business