A Holistic Gospel: Seeing our Sinful Selves in the Despised Other 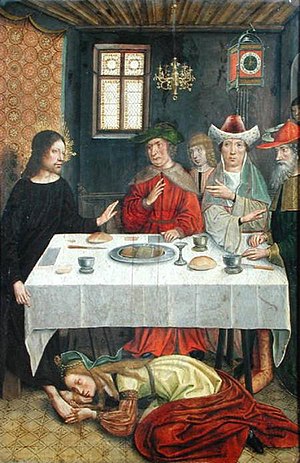 The Meal at the House of Simon the Pharisee (Photo credit: Wikipedia)

For some reason I think I have often tended to assume that God’s preferential option for the oppressed on the one hand and the call for our own personal repentance on the other are very different and separate aspects of the Christian faith (individual vs. social salvation, etc.).  And indeed, in the history of American Christianity in the last century, conservative and liberal churches have usually swung to one side or the other, respectively.  What I find in the quote below, and as those like Gustavo Gutierrez and Jon Sobrino have taught me before, however, is that these two dimensions of faith and spirituality are intimately linked.

A sermon in church yesterday also reminded me of this, as the story from Luke 7 of the sinful woman with the alabaster jar of perfume who anoints Jesus was expounded.  Simon the Pharisee is unable to see that he and the woman ultimately stand on the same ground.

Why does the Bible, and why does Jesus, tell us to care for the poor and the outsider? It is because we all need to stand in that position for our own conversion. We each need to stand under the mercy of God, the forgiveness of God, and the grace of God—to understand the very nature of reality. When we are too smug and content, then grace and mercy have no meaning—and God has no meaning. Forgiveness is not even desired. When we have pulled ourselves up by our own bootstraps, religion is always corrupted because it doesn’t understand the mystery of how divine life is transferred, how people change, and how life flows. It has been said by others that religion is largely filled with people who are afraid of hell, and spirituality is for people who have gone through hell.

Jesus is always on the side of the crucified ones. He is not loyal to one religion, or this or that group, or the “worthy” ones—Jesus is loyal to suffering itself, wherever it is. He is just as loyal to the suffering of Iraqis or Afghanis as he is to the suffering of Americans. He is just as loyal to an oppressed gay man as he is to an oppressed married woman. We do not like that! He grabs all of our self-created boundaries away from us, and suddenly all we have is a free fall into the arms of God, who is our only and solid security. This seems to be God’s very surprising agenda, if I am to believe the Bible.

— adapted from A Lever and a Place to Stand: The Contemplative Stance, The Active Prayer by Richard Rohr