Karl Rahner on humanity's sense of guilt before God 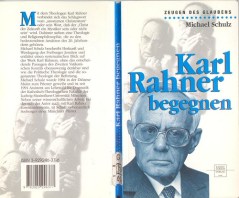 “The topic, “humanity as a being threatened radically by guilt,” is undoubtedly burdened today with a special difficulty: we cannot say that people today are bothered in a very immediate way and at a clear and tangible level of their consciousness by the question whether and how as sinners in their individual histories of salvation and its opposite they find a merciful God, or how they are justified by God and before God.  The normal person today does not fear God in this sense, and the question of his or her individual justification, which was, once with Augustine and then again at the time of the Reformation, the question on which the church was to survive or perish, this question does not bother people today very much or maybe even not at all . . . It might be the case, of course, that in the depths of an individual’s conscience and a really decisive points in someone’s person history it is a very different matter.  But judging by first impressions, in everyday life people today have no clear consciousness that they stand before God burdened by guilt and blame which cannot be shifted and as people deserving condemnation, but who nevertheless are saved by the incalculable miracle of God’s pardon, by God’s grace alone, and are accepted by God (Luther, Pascal, etc.) . . . A person today, then, is more likely to have the impression that God has to justify the unhappy condition of the world before human beings, that they are the sacrifice and not the cause of the condition of the world and of human history.”

Rahner goes on to make several other compelling observations.  First, regardless of the above, human beings do have a sense of the moral and what they “must” do in their lives.  We experience all of our finitude, fragility and ambiguity in the area of moral norms, he says.  Rahner understands this morality in terms of both our freedom and responsibility.  His notion of freedom is not about the ability to make arbitrary decisions one way or the other, however;  rather, Rahner sees humanity’s freedom as a totality of the direction of one’s existence expressed in the form of either a “yes” or “no” to God.

But this “yes” and “no” are not mere parallels choices.  Nor are they in any way the mere some of our good and evil acts.   A “no” to God can only be understood in light of the possibility and God’s intention for our “yes.”  Similarly, guilt can really only be grasped in a dialectical relationship with forgiveness.  In a way then, Rahner is saying we must be “Hearers of the Word” before we can truly know our radical dependence on God and need for the forgiveness that is offered in the coming of God to humanity through Christ.

What has always interested me about Rahner though is the extent to which he refuses to put up boundaries that demarcate access or status for anyone’s existential relationship before God.  As he rightly argues, the warnings in Scripture about judgement are just that — warnings — and they pertain to life here and now.  Eschatological accounts or mentionings of “hell” are not predictions for any individuals per se.  What these sayings do tell us, however, is that the possibility of a life decision against God is real, has final consequences, and should be taken very seriously.

Rahner tells us not to worry about the end so much or who and who’s not going to make it, but to focus on the way that leads there.  In other words, in many respects the decision is “hidden” — even though the way is made known and fruit will be shown.

My question in light of all this is, how do Christians convey this existential need and guilt before God — particularly given the difficulties set forth by Rahner’s above outline of the contemporary attitude?  I find his description of people today to be very accurate, and it probably describes me too from time to time!  Is this really bad?

I think it is . . . and it isn’t.  People just don’t believe as easily anymore that God is out to smite them.  Frankly, I’m kind of glad.  At the same time, I recognize that there are lots of potential problems with this.  The damage of individualism cuts both ways, in Christian and non-Christian circles.  Individualism can have a kind of positive expression, in which we isolate ourselves before God in the Kierkegaardian sense, but individualism today in the Western context looks more like ignoring responsibility for social ills and personal piety.  This is related to Rahner’s characterization of humanity ontological condition of freedom and responsibility.  It makes me think of the situation of globalization today very much and the lack of awareness and concern for the humanity’s heightened interdependence and the contingency of society and the planet itself.  We do not appreciate these realities, and yet they may be making the best case possible for the truth about sin and guilt.

Maybe this is a clue into a new way of talking about sin at the popular level.  The problem is not as much that any one person’s “no” is so condemnable — though in a sense it is! — but more so  that our collective “no” is.  The pain, betrayal, lust, hate and violence caused by human beings trying to run their own show and revolve the world around themselves is inexpressibly dire.  Everybody knows this if they’re honest, and we all see some of it even in ourselves.  We participate in it, and we should all take part of the blame.  According to Rahner, we know it too because of our openness to the “beyondness” (transcendence) and mystery of God that is historically mediated to every person’s experience of reality.  This openness is what raises our awareness of guilt before God despite our varying degrees of “righteousness” before each other.

Maybe the conversation can start with that.

William James' "Will to Believe" for a Post-Christian Age