William James' "Will to Believe" for a Post-Christian Age 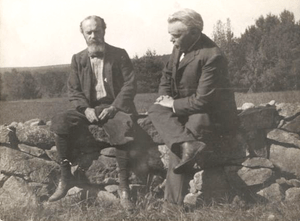 On the one hand, it’s common to hear sometimes these days about a church or Christianity “beyond belief.”  I think this is good and needed.  On the other hand, obviously belief still matters.  This is why the words of William James are interesting to me.

The “will to believe” for James is a living, forced and momentous choice.  He calls those who might be willing to risk belief “tender-minded individuals.”  James talks about the benefits of religious belief in this life — not just the cost-benefit game of Pascal’s wager after life.

But by benefits now, James does not mean to endorse a kind of therapeutic or health and wealth gospel.  Nonetheless, belief gains us certain values and goods for living without which we would be much amiss.This view is not the same as advocating that we go around believing in fairy tales.  Moreover, the consolation that comes from belief is not about circumstance or even reward.  Rather, I think, he understands it to be about truth itself — beauty, goodness, and other “transcendentals.”  Of course, as a pragmatist James doesn’t tend to use the traditional metaphysical vocabulary much, but I don’t see why we can’t.

In sum, for James the religious question “is primarily a question of life, of living or not living in the higher union which opens itself to us a gift.”  I’m pretty sure this sort of thing resonates with people today, with those outside and inside the church alike:  “higher union,” “openness,” “gift”… this is the language of faith, serenity and purpose we all look for.

What Jesus does is concretize belief, but not in a way that confines or merely regionalizes it.  He makes belief accessible to everyone, always with respect for context.  As soon as folks gather around belief though in a more organized and religious way, it gets messy.

This doesn’t mean we shouldn’t organize, but it means we need to be careful about how and why we do.  I want to talk about some modes of ecclesial organization in the next post.

Karl Rahner on humanity's sense of guilt before God

Church as Messianic or Prophetic? Attempting a Clarification