Transcending and Including the Reformation: A Tribute

In Church and World, Theology

[A version of this post appeared on the Missio Alliance blog on November 7, 2017.]

As Christians, we all have our own journeys to go on. And rarely is the path straight. There is progress and regress. I think it’s safe to say the same has been true for the Church throughout its history. One of the best pieces of advice I got as a graduate student in theology was that, no matter how much I may learn, grow, and change, I should always try to make room for the old versions of myself. I’ve also heard it said this way: what we focus on determines what we miss, and while God is always calling us forward, it’s easy to disdain the good things we used to know.

500 years after the Reformation, how does the Church continue to grow and change while still making room for what has come before?

My family was Southern Baptist growing up, and then we joined a non-denominational congregation that was part of the seeker church movement. I later went to a Baptist university and seminary. For a while I attended a charismatic church, and this was one of the most formative seasons of my life. Throughout my years in school, I spent summers abroad in Spain, Mexico, and Argentina with Baptists, Catholics and Bible church folks. I worked as a youth pastor at a United Methodist Church in Los Angeles and as a professor at a Catholic University in San Antonio. And for the last three years, I was a pastor in an Anglican Church in South Carolina.

After all of this, I still call myself an evangelical and a Protestant, but with an asterisk. I would need to add words like contemplative, Wesleyan, charismatic, liturgical, Anabaptist and Sacramental. All of this to say, I, like many others in my generation, am the product of an inter- and post-denominational age. And yet here we are approaching the 500th Anniversary of the Protestant Reformation, which, among many other things, gave rise to denominationalism.

The Legacy of Protestantism

In 2008, Phyllis Tickle made quite a splash with her book, The Great Emergence, in which she argued that the Church has already been experiencing the next reformation. I had the fortune of getting to speak with her about this when she came to Baylor. I was fairly surprised to discover that, despite her bold claims about a massive rummage sale going on in the Church, she also had a humble and simple Anglo-Protestant piety about her. She could eloquently account for the effect of any historical development on Church and society: the erosion of biblical authority, the sexual revolution, the Civil Rights movement, new discoveries in the sciences, global capitalism, and so on. And yet, we were talking about the problem of religious pluralism over dinner during her visit, and at one point she said: “If you don’t eat the body and drink the blood, well then…may God have mercy on you!”

It was as if there was something at the heart of the Reformation that even this prophet of Protestantism’s downfall herself could not relinquish. After all, what is the legacy of Protestantism if not the proliferation of perspectives on precisely this issue? From Baptism and the Eucharist to Calvinism and Arminianism, did not the Reformation produce answers to one central question: How are we saved?

Of course, behind this question was also the question of ecclesiastical authority. Sola Scriptura, Sola fide, and Sola gratia were the responses to Roman Catholic corruption, and scores of us remain indebted to this rich heritage of courageous protest and sacrifice. Not only the household theological names of Luther, Zwingli and Calvin, but martyrs by the hundreds gave their lives for the cause of elevating the Bible above the Magisterium, and moreover, eventually delivering it into the hands of the people. Huss (and Wycliffe much earlier), Tyndale, Cranmer, Latimer, Ridley and so many others. And that’s not even to mention the Anabaptists, who were persecuted by other Protestants, and who were the true reformers of church-state relations and witnesses to Jesus’ teachings against violence — in addition to believer’s baptism. These men (and unnamed women) are our saints. (See Roger Olson’s excellent and much more comprehensive post on the Reformation’s legacy and why he’ll celebrate the real beginning of the [Radical] Reformation in 2025. Olson also argues, citing Bebbington and Noll, that it is really Arminianism, Pietism and the Great Awakenings, and not solely the Reformation, that pave the way for what would now be considered classical evengelicalism. I also resonated with this article by Hauerwas that somewhat justifies the persistence of Protestantism even today.)

The Age of the Spirit

In the West, some have called the early to late Medieval centuries of the Church the “Age of the Father.” The Reformation, subsequently, ushered in the “Age of the Son.” By the early 20th Century, however, and probably long before, change was in the air. The turning point probably doesn’t have a date, but Azusa Street is as good a marker as any. It was a new dispensation of sorts, the “Age of the Holy Spirit.” Curiously, with a few exceptions, most of the famed 20th Century theologians didn’t grapple with Charismatic Christianity. It just didn’t seem to fit. 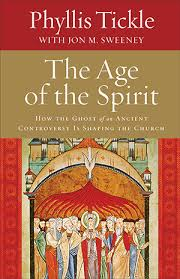 But much like in the book of Acts, the Spirit appeared to be moving among the uneducated and unauthorized. Every movement has a dark side, and Pentecostalism was no exception, but in addition to the experience of new charisms, the Charismatic awakening brought unprecedented racial and economic diversity into worship. Today there’s scarcely a church that hasn’t been touched by it. Within the post-colonial era, the South did indeed rise again — the Global South, that is, and the next great chapter of church history and theology will not likely be European or American.

The Three Streams, and Beyond

In 2014, I became a pastor in a church that was part of a small denominational movement called the Anglican Mission in America. Inspired by the work of missiologists like David Bosch and Lesslie Newbigin, and drawing on the tradition of St. Patrick and Celtic Christianity, this group of church planters and breakaway Episcopalians formulated an identity not based on any one of these three great periods in Christian Church history, but on all of them. They called themselves “three streams” Christians. They claimed to be catholic, evangelical, and charismatic. 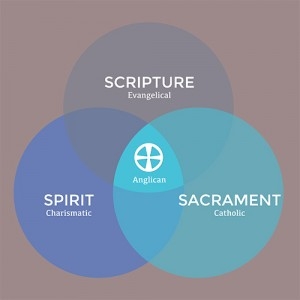 Now, the three streams are great, but they don’t tell the whole story. We in the West have also learned from the Eastern Church. In addition to Pentecostalism, the 20th Century American religious scene gave us the retrieval of Patristic and pre-Reformational spirituality. One leading figure responsible for this recovery was Thomas Merton. Personally, if I had not been introduced to the contemplative tradition as a chaplain during seminary, I do not know where I would be today.

And finally, while atheism, Darwinism, biblical criticism and eventually the Holocaust raised challenges with which the Church is still wrestling, there arose another prophetic voice. It was the voice of liberation, and it continues to speak from many difference marginal experiences. Whether Latin American, African-American, feminist, womanist, mujerista, Minjung, Palestinian, or otherwise, as these theologians would have it, if the gospel isn’t good news to the poor and the oppressed, it isn’t the gospel.

Transcending and Including the Reformation

Still, at this 500-year juncture, the gift and legacy of the Reformation is not to be left behind. It must live on. True, it must be transcended, but also included. The Reformation resides at the heart of evangelicalism. It reminds us that the Christian faith is intensely personal, and that evangelion is still a very good word! It’s the stream that preaches the gospel. Not that the gospel wasn’t preached before, but Protestants revived it at a crucial moment when the Church had lost its way and forgotten about the assurance and comfort of God’s grace by faith in Christ.

So while in the 21st Century it may be safe to say that Mere Protestantism will not do, and ecclesial provincialism is a thing of the past, so is lowest-common denominator ecumenism. Modernity in the 20th Century tried one last time to crack the code on religious diversity in search for a universal theology derived from Enlightenment anthropology. And it failed. So while we must be nurtured by each of the three streams — the Catholic, Evangelical, Charismatic, and others — there will usually be one that is our home. If we forego our particular histories, we risk the universal absorbing us into abstraction. So yes, Catholics will go on being Catholics, and the same goes for Baptists, Anglicans, Pentecostals and so on. The key is simply to make room for other streams to flow through us.

But not simply so that we can remain relevant in a time when no one cares if you’re Baptist or Methodist anymore. Rather, as white Christian America moves from majority to minority, and American civil religion makes another nationalist and even racist grab for power, what were once perhaps beautiful and faithful expressions of Reformation heritage and denominational identity are now giving way to consumer religious preference, at best, and a dying gasp of white Protestant privilege, at worst. By drawing on different streams from the whole Christian tradition, religious consumerism, Protesant privilege, nationalism and even racism can be resisted.

The Age of the Church?

So yes, this may be called the Age of the Spirit, but we are also living in a pivotal time for the Church. As many others have pointed out, however, it’s one that in North America will probably look more like the first few centuries of Christian history than the last sixteen. Discipleship will not be optional anymore. Theological education will continue to become less formal but even more critical. It is a time in which the church must become more important, not less, but it will have to do so precisely by kenosis, not triumph.

500 years after the Reformation, though the world is radically different, as Protestants and evangelicals we still need the same courage that Luther had to “do no other” — the courage to be reformed and always reforming, and the wisdom to transcend while also including what the Reformation has given us.

The Matthew 25 Gathering: A Eucharistic Ecclesiology of Justice and Mercy Contending for Shalom

A Eucharistic Ecclesiology of Justice and Mercy